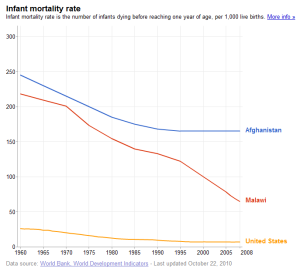 Afghanistan’s health profile could be considered to be the worst in the entire world. Infant (1.65/10 births) and maternal mortality (1.4/100 births) are high and life expectancy short (46 years) (World Bank) After years of warfare, an anti-woman Taliban regime, it can be said that even the most basic of health needs have remained unattended to, largely ignored and out of the public discourse.

In 2002, post invasion, the Afghan Ministry of Public Health along with the World Health Organization, UNICEF and United Nations Population Fund established a framework of basic services, which included essential mother-child health care, basic vaccinations, control of TB and malaria, nutrition and basic mental health services. Tuberculosis and malaria (largely vivax) run rampant throughout Afghanistan. Through the proactive efforts of Rural Expansion of Afghanistan’s Community Based Health Care, health care access in Afghanistan has gone from 40 to 77 percent in the past 8 years, but that still leaves more than 7 million people without any access to even the most basic of care. To put it in perspective, this would be equivalent to the entire population of Michigan having no access to any type of health care at all.

While pictures we see of Afghanistan here are largely from the large population center of Kabul, it is forgotten that Afghanistan is roughly the size of Texas and provides home to nearly 30 million people. Afghan residents are spread in nearly every quarter of Afghanistan and largely have little access to basics such as electricity and schools. One of the poorest countries and lagely inaccessible places on the planet, it is no surprise that the country has massive internal challenges to surpass. 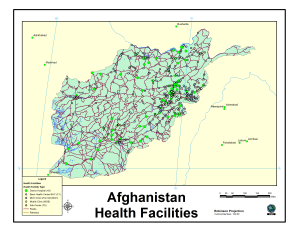 The Afghan MoPH maintains a listing of all Basic Package of Health Services facilities throughout the country and has made a database freely available online. There are nearly 800 facilities spread throughout Afghanistan, consisting of District Hospitals, Basic Health Centers and Mother Child Health Clinics. Kabul has the largest number of facilities at 79. 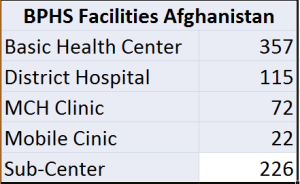 Assuming the 115 District Hospitals accept any Afghani seeking care, the average catchment of an Afghan District Hospital would include nearly 270,000 people. To put this into perspective, Michigan, with a population of approximately 10 million people, has nearly 1,320 hospitals. That’s one hospital for 8000 people. Accounting for population and potential catchment areas, there are hospitals (that are likely understaffed and underfunded) which serve more than 1.7 million potential patients (Chahar Burjak Hospital), whereas hospitals near Kabul and Kandahar which serve less than 200,000 people, still an incredible number when placed against the United States. 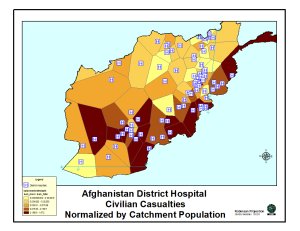 It is doubtful that local small health facilities are equipped to handle seriously injured individuals. Thus, civilians wounded in conflict events must either make their way to a district hospital, hope for the best from the local facility or do nothing and potentially die. Thus, it would be of interest which facilities potentially serve the largest number of civilian casualties and where they might be located. The map on the right shows the number of civilian casualties as a function of the underlying catchment population. The units in the legend are odd due the the catchments being in millions, but the relative color scales not. Facilities in the southern districts are disproportionately overloaded due the high number of civilian casualties within their respective catchments. 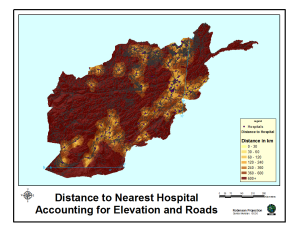 Hospital access, in addition to overburdend by the sheer numbers of the surrounding population are mostly inaccessible to the Afghan population, as the figure on the left confirms. Accounting for elevation, slope and the rudimentary road system, the brunt of Afghanistan has no access to health services. Most areas of Afghanistan are located more than 300 or more kilometers from the nearest hospital.in developing country contexts, 5 km or more is considered to be a market of lack of access to health services. As in all developing countries, facility utilization is strongly related to proximity to services (O’Donnell 2007).

Although completely reprehensible, conflict events do occur at health facilities, particularly those which are located in urban areas. The recent “Afghan War Diary”, unfortunately, confirms that they not only have occurred, but are fairly commonplace. For the purpose of this analysis, I considered any event within 100 meters of a health facility to be at the facility itself. Summing over all the events within the 100m buffer, I discovered that none to as many as 25 events occur at facilities, specifically at the Hilmand District Hospital.As many as 31 people have died in attacks on health facilities, and as many as 13 have been wounded in events on or directly proximal to a hospital or clinic. It is well worth noting, that the largest numbers of attacks on health facilities occurs not within crowded Kabul, but rather in the rural northern areas.

Relationship of Distance from Health Facility to Civilian Casualties 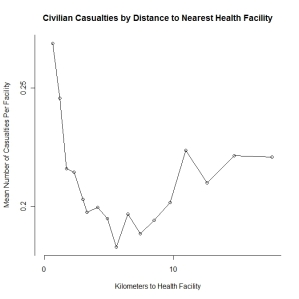 Calculating the mean number of casualties per facility by deciles of distance to health facility from the conflict event, I found that the most casualties occur near facilities. Facilities are often located near infrastructure and market centers, raising the likelihood of civilian casualty should a conflict event occur. yet, this calculation is restricted to actual events. Although the mean difference is only slight, the pattern of decreasing death and injury with distance is striking. However, without data on the distribution of households in relation to health facilities, true effects are difficult to determine.

The Afghani health system, already strained to the gills with immense public health challenges, suffers under the brunt of a lack of public funds in a non-existent economy, warfare, a dearth of trained physicians and the massive populations which they must serve. That conflict events which result in civilian casualties occur in the proximity to health facilities is unforgiveable and all parties in this senseless conflict would do well to respect the safety of the Afghani civilian population. While the outlook under the present government is miles above that which existed (or didn’t) under the Taliban, there is still much to do.

Zwarenstein, M., D. Krige, and B. Wolff. 1991. The use of a geographical information system for hospital catchment area research in Natal/KwaZulu. South African Medical Journal 80: 497-500.