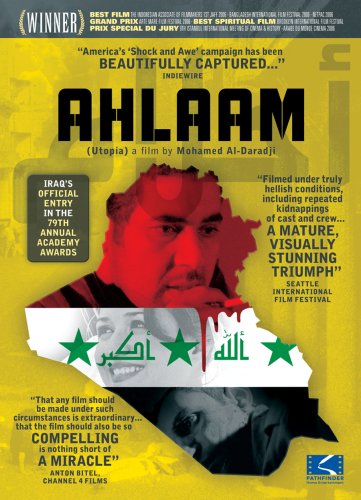 Continuing a series of fictional movies shot in real warzones on this blog, Ahlaam is a fantastic film. Iraqi born, London trained director Mohamed Al Daradji traveled to Baghdad in 2004 to film Ahlaam with a cast of everyday Iraqis and legendary, but displaced, well known Iraqi stage and film actors. Much akin to the incredible Heavy Metal in Baghdad, Al Daradji presents a disturbing picture of every day Iraqi lives pre and post Sadaam. He recreates the allegedly true story of three people from a mental institution in Baghdad and the great sadness that their friends and family experience. While politics plays out in the form of guns, violence and marginalization, everyday Iraqi people somehow have to piece together what they can of their troubled lives. The acting is excellent and incredibly sincere. Some of the looting and rioting scenes are difficult to watch. It’s unclear whether they scenes are staged or if the film crew took the opportunity to shoot in the midst of true chaos. One crew member was kidnapped, the rest were purportedly lined up against a wall during filming to be shot by insurgents, harassed by American patrols and a 14 year old mike operator was shot in the leg while filming but the movie got made anyway.