I’ve been distracted from writing on this blog due to a combination of back to school overwhelm-ment and a read of Katsuichi Honda’s landmark work on the controversial Nanking Massacre. I’ll spare a run down of the event, but will suggest his book to anyone interested in how disasters like Nanking come to pass. The Holocaust, Abu Ghraib, Mi Lai, gang rapes of schoolgirls in Okinawa, organized lynchings in the United States, the atomic bomb attacks of Nagasaki and Hiroshima, and the recent revelations of the killing and collecting of body parts by a group of American soldiers in Afghanistan are all, on the surface, inexplicable, but knowing that the participants are likely not all that special makes their occurrences real and frightening. Anyone could be a participant in any of these crimes with the right combination of group-think, fear, desperation and the inability to see their victims as living, breathing, feeling human beings.

In the early 70’s, Honda ran a series of articles in the Asahi Shinbun detailing eyewitness and newspaper accounts of atricities commited by the Japanese military during the invasion of Nanking. The articles and the subsequent book helped prompt a fierce debate within Japan that continues to this day. Many books on the massacre have been written, some are good, some are bad and some are revisionist texts written by right wing Japanese groups with a specific political agenda.

While I’ve not read every book on this event, I’ve skimmed through a few, and this is the best and incidentally, the most horrifying that I’ve seen. The eyewitness accounts of both the Chinese victims of the assault and the soldiers who participated in them present a vivid picture of the unthinkable, but Honda weaves the book into a treatise on how a government propaganda machine can use the press to suppress damning information and allow atrocities to continue.

Honda’s book presents accounts that appeared in Japanese newspapers at the time, and the more truthful accounts of the people who wrote the articles. People who were willing to come out later and tell what they really saw. One has to wonder the role that a truly free press could have played in halting the massacre or in at least reigning in the absolutely out of control Japanese military.

People like Honda are heroes. Unlike Germany and Italy, Japan did not make a full accounting for it’s actions during the imperial years in the period following World War II. There were limited war crimes tribunals to prosecute major players in the Asian occupation, but the horrific events during that time were not a major part of public discourse. This was partly a result of American policies forbidding representations of Imperial Japan in the popular media, but likely mostly the result of a victimized populace that preferred to move on, rather than dwell on the mistakes of the past.

This changed in the 1970’s when Honda’s articles began to appear in the Asahi, and the events in Nanking finally entered the public debate. Right-wingers, anxious to create a positive view of war time Japan and fight off what they saw as an oppressive meddling in Japanese politics by America and other foreign powers, summarily denied the existence of the massacre and cast aside Honda’s reporting as pro-Chinese propaganda. Honda, in response to the revisionist’s claims in the media and in the famous but conservative Bungei Shunju, continued to publish and eventually released this book, an abbreviated version of a monster 3000 page manuscript. While the full version has yet to appear, the book itself shattered revisionist claims and positively contributed to the debate as to how events like Nanking are to be treated in Japanese schools, and, by result, how the events are to be viewed and remembered by future generations.

This was, in no doubt, a risky venture and Honda likely put his life and safety on the line. Most likely, his high profile status as a writer protected him from the worst, but could have easily cost him a career. Honda’s incredible contribution to human rights awareness and to greater social change cannot be denied, lending credence as to the great power that journalists have in maintaining a conscientious and fair society. 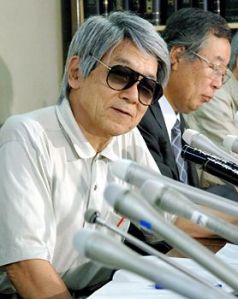