I have written about Lucius Banda before. Lucius is a long active musical legend in Malawi. Hailing from Balaka, Lucius is known not only for his crooning talents and incredible charisma, but also for his political activism. He once held a parliamentary seat, but was stripped of his title once it became known that he had falsified his educational credentials. The government pursued the case and had him sentenced to 7 years hard labor in the correctional hellhole that is the Malawian prison “system.” Essentially, he was given a death sentence. The Zomba maximum security prison, where he was held, can boast that 1 in 20 of its inmates die every year due to TB, HIV or inmate violence.

Later, as would be expected, the sentence was overturned and he was freed. Not to be deterred, made an album (15-15) including anti-Bingu (Malawi’s number one leader) songs that was soon banned by the Malawian Government. Banda has since indicated that he is going to make a run for the Presidential seat in 2014. He has incredible support amongst the poor (pretty much 90% of Malawi), due to both his political activities on their behalf and to his widely popular singing skills. I doubt that he will get elected to the Presidential office as he has many enemies within the present government, but he will certainly present a serious challenge to Malawian democracy if he somehow manages to get a fair share of the popular vote.

I had the opportunity to go and see Lucius live at an independence day celebration recently and, even better, had a chance to meet the man as the picture below proves. I’ve met a lot of artists in my time, but meeting Lucius was incredible. He a gracious and straight up dude and it’s easy to see why he is so well loved among Malawians. His music may not be entirely my thing, but meeting such a huge Malawian figure was a privilege that I will never forget.

I also was able to pick up some video in between bouts of fighting off all the people trying to steal shit out of my bag. Fortunately, there was nothing in it. We had to be airlifted out of the show later and regrettably could not see all of Lucius’ set, but this is at least a taste. Highlight of the evening, being pulled on stage to dance after a call for “all the white people in the house.” There were three of us and two of us (I am the third) wowed the audience with our dancing skills. 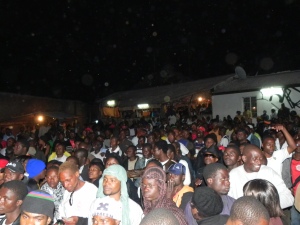 Speaking of politicians, I got this picture of a Malawian military card from the regime of the dictator, Kamuzu Banda (Life President from 1964-1994): 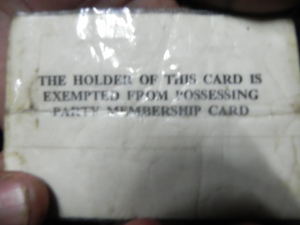 I’m still surprised (or maybe not) at how much support Kamuzu Banda (no relation to Lucius) still gets, particularly among the young and wealthy. Perhaps they are too young to remember the incredible savagery that was wrought upon free-thinking individuals during his reign. Malawi still cannot be said to have a perfect democracy, as Lucius Banda’s imprisonment shows, but it can be said that Malawi has come a long way since the brutality of Kamuzu Banda’s government, a brutality which differed little from that of the British occupiers.