I had the incredible fortune to run into the “Refuse Stealing Band” or the “Kukana Kuba Band” on the way home today. I still haven’t figured out if they are the “Refuse Stealing Band” as in, they refuse to steal, or whether they are the “Refuse Stealing Band”, as in a band that steals refuse (note: it has been since confirmed that the meaning is the former). I had heard stories of young bands that fabricate their own instruments out of wood and wire to create Malawian music, but tonight, I was lucky enough to find one. I have attached a picture of these two guys from Ndirande, which is a densely inhabited urban slum area north of here, but an upload of the incredible video footage will just have to wait until I have a proper internet connection. I can only hope that I will have the chance to see one of these “jazz” bands again soon.

Malawi has a long tradition of music, largely unknown to the rest of the world and, like other countries, it has a wide diversity of musicians and styles. This type of band, possibly pioneered by the legendary blind jazz and blues performer Alan Namoko Band in the 1970’s, is known as a “jazz” band, although quite unsimilar to that which is known as jazz in the US. Malawian musicians such as these two have little resources to buy instruments so they must fabricate their own from whatever materials are available. But what they lack in material resources they more than make for in precisions. The string player spent no less than 3 minutes painstakingly tuning his intrument, indicating that the construction and design of his bass/banjo/drum is deliberate and calculated. I am unaware of the creative process that goes in to the music itself and suspect that much of the music is either borrowed or inspired from other people in the genre, but the result is mindblowing in my opinion.

In true Malawian style, the music is quiet and unassuming, but incredibly complex and textured. The audio on the video I took simply does not do the band justice. I wish that someone would bring these guys or bands like them to the states so that all could experience it. In an alternate life, I would have loved to explore and document this country’s musical heritage, but, fortunately, others have taken the initiative to scratch the surface. Malawian music is available for purchase here. I’m also willing to share what I have with whomever might be interested.

I’ve spent the past days with mzungu, watching soccer on big screen tvs in bars and eating far too much in a country where tons of kids don’t get enough protein to be able to develop well enough to survive past their fifth birthday. It’s a rather odd feeling. I feel no guilt; that’s a pointless venture. But although Malawi’s economy is the second fastest growing in the United States and the quality of car and buying power of many Malawians has expanded even in the twelve months that I’ve been related to this country, there is still much work that needs to be done to balance out the incredible inequality that exists here. Hanging out in places where people spend the equivalent of a months wage for an average Malawian in a minute and watch sports without power outages in an English speaking environment just strikes me as surreal. Most mzungu never pick up the local language. It’s easy to see why.

There has been an outbreak of measles in the Machinga District, north of here and toward a large nature reserve on the banks of Lake Malawi. It is likely that, despite extensive vaccination efforts, the conditions were right to facilitate spiraling measles transmission in children. In America, we have to presnt detailed and exasperated arguments to get partenst to properly vaccinate their children. In Malawi, mothers line up eagerly in the Machinga District Hospital to get their children vaccinated before the worst can occur. The Malawian government is unable to provide resources for this impoverished population. Doctors Without Borders has set up a temporary vaccination site and is furiously trying to keep pace with the incredible demand by vaccinating more than 2.5 million children throughout Malawi

Machinga district Hospital appears to be an excellent facility for reproductive health, advertising proudly that it is a hospital for healthy babies. By all appearances, they struggle to provide as quality of service as they possibly can and look to be well outfitted. However, a walk around the compound provides a look into the incredible challenges they must face there. 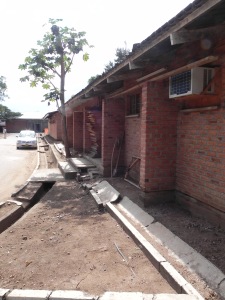 The TB and AIDS wards appear packed to the gills, and incredibly ill patients walk about the compound aimless and clearly exhausted from fighting the specters of disease and physical debilitation. I spot what appears to be an ancient woman who is likely not but 50, give me a glazed look before she hikes up her skirt and urinates, standing, not but 10 feet away from me. Perhaps this is common practice here in rural Malawi and my wealthy sensibilities are merely unused to what could be a full natural human behavior, but after a litany of ill children, ill parents, TB patients and human suffering that desperately collects about this overworked facility, I can’t help but think that this is the true cost of disease, poverty and poor distribution of worldwide resources, the cost of human dignity and self determination.

It does not make me feel the fake guilt that we are trained from birth to feel. It does not make me feel sadness or pity, but it does anger me that in 2010, at a point where portions of humanity are living wealthier and healthier than any other time in human history, that a combination of bad governance, lack of development and use of available resources and the surrounding spectre of an environmental climate that favors the circulation of infectious disease at the expense of human health is allowed to continue. Of course, it only strengthens my lean toward atheism. If there is a god, then he must truly hate his most faithful of sheep.

Full time residents who likely work at the facility appear to have reasonably good accommodations, ancient solar power units adorn the houses and music emanates from inside, indicating that all is not unwell. Technology is not completely unknown in this end of the world, and those who have it and the education necessary to keep it, can at least somewhat shield themselves from the worst. One has to remember, however, that the residents of these dwellings are those who fight the hardest fight every day, often at their own expense. I’ve met a number of doctors here and don’t think that I’ve met a smarter, more dedicated lot. It can be said that they have gone a route that is lucrative here in cash strapped Malawi, but I am positive that these people put in more than their allotted number of hours. In the end, they don’t make even as much as a full time convenience store worker in the US and work twice as much, under the most challenging of conditions. No wonder Malawi has an incredible problem keeping doctors and nurses in the country. The situation is improving, but this country of 15 million people still has less than 250 doctors in the entire country. One can hope that the expanding economy will encourage more physicians to stay and offer promising students the opportunity to obtain training. All is not bad.