I skipped day 3 since nothing worth noting on this blog occurred. I’m losing track of the days anyway. On what I think was day 4, I went with some colleagues from the Malaria Alert Centre on a climbing expedition to Mount Mulanje, which is about an hour and a half southeast of Blantyre and close to the Mozambiquan border. Mount Mulanje is notable for being the highest mountain in all of Malawi and one of the highest mountains in Africa. Sapitwa is the highest peak of Mount Mulanje at over 3000 meters. “Sapitwa” literally means “don’t go there” in Chichewa. Several hikers have died or disappeared hiking it and their bodies were never found. Malawians will consistently warn you that evil spirits reside on Sapitwa and will predictably tell you “don’t go there”, hence the name. Hence, not wanting to encounter evil spirits, we opted for the friendlier second highest peak, “Namasale”.

Our first stop was to the Forestry Reserve office, who graciously allowed us to leave our vehicle parked there while we hiked the mountain. Mount Mulanje is not only a beautiful hiking spot, but is also the home of the Mulanje Cedar tree which can be found nowhere else in the world. Mulanje Cedar’s rarity along with its sweet and pungent smell make it highly prized for furniture, wood carvings and artwork around the world, and thus a target for poaching. Samson, who heads this particular Forestry Reserve station,kindly showed me a warehouse filled with milled Mulanje Cedar boards and saws that had been confiscated from local poachers.

Notice the lack of glass in the buildings. Recently, a group of angry poachers attacked the Forestry Reserve buildings and shattered all of the glass windows and trashed the place in addition to beating the workers to get them to stop their control efforts. The impoverished Malawian Government is unable to provide security for the Forestry workers, who are the target of poor locals trying to get by through illegal means, which will eventually endanger the entire area in the long term. It’s remarkably similar to rural logging areas of the US who see the Federal Government as standing in the way of profits for the sake of seemingly unimportant environmental reasons.

Like all of Malawi, deforestation is threatening the entire area, which provides a home for Malawi’s countless bird, animal and insect species, in addition to controlling deadly mudslides and erosion. To respond to this desperate need to maintain forest stability and replenish deforested areas, the Forestry Reserve routinely plants cedar and pine seedlings throughout the area. Samson demonstrates the staging areas for planting seedlings and the results of an experiment to introduce a new species of pine to the area for erosion control but notes the difficulty in planting and maintaining the forests. The Forestry Reserve workers face incredible challenges both from the local residents and from the fragile ecology of the area but they are dedicated to the area and to the forest. 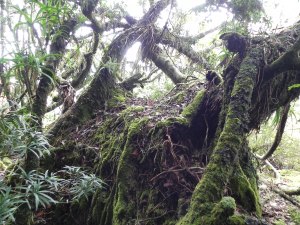 The amount of plant diversity on Mount Mulanje is staggering. Every kilometer or so, we passed through a completely different ecosystem, from grass lands to temperate rainforests to bamboo forests. Although there was no indication of a large variety of mammals, we did see droppings from mountain goats and rabbits. Our guide indicated that leopards live in the region, but others in the parted noted that there was little evidence of their existence here. The only wildlife we did happen to see was a large baboon crossing a stream on the way back. The oft celebrated Malawian bird diversity seemed to be represented only by a few pier crows and some small sparrows. It is possible that we were merely in the wrong area to see animal life, but what lacked in mammals and birds, was certainly made up for by plants.

On the plateau, us ueber-riche mzungu stayed in a camping house that the Forestry Reserve rents out to visitors, while the Forestry workers sleep in traditional Malawian huts outside. I slept on the porch just because. The mountain is so high up, that it breaks the migrating clouds and induces rainfall onto the slopes, providing water to the entire plain below. At night, when clouds pass, the winds hurl and water droplets cover everything in sight.

The hike up the mountain wasn’t nearly as bad as I imagined. Some areas were nearly vertical, but most of the walk was fairly flat. Fortunately, the igneous rocks are rounded and easy to scale. After some time, we made it to the top, but unfortunately the view was spoiled by a evil cloud that appeared right as we reached the summit of nearly 2600 meters. The way down was much worse than the climb up, but it went quick and was even more beautiful than the way up. Hopefully, I will have a chance to do it again. Below is a picture of me reincarnated as a member of Foghat along with our guide, Peter. Peter was a fantastic guide and effortlessly climbs the mountain, in contrast to us weak mzungu. 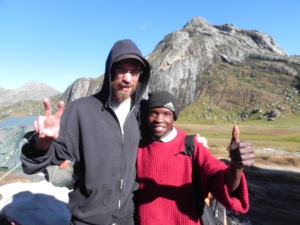 As an aside so that I never forget, I had an incredible conversation with him about “witchcraft planes”, which transport Malawians to distant locales at night, but which often crash into houses and kill people. Witchcraft legends persist all over SSA, and Malawi is no exception. Peter does not believe that there are any evil spirits on Mount Mulanje, but he did note the uselessness of the witchcraft planes in that they only fly at night, while Air Malawi flies in the day, serving more people. This may be fortunate given the witchcraft planes’ poor safety record. While I doubt that Peter believes in withcraft planes, his animated conversation on the subject along with his extensive knowledge of the mountain and all of its wildlife and plants was unforgettable.

Mentioning the first highest peak, Sapitwa (lit: “Don’t go there”), to Malawians will elicit a flurry of mysterious stories and ghost legends. Stories which everyone, except the people who work on the mountain, believe are completely true. The stories are mostly similar, but have some interesting variations, given me reason to be skeptical as to their veracity. Here we go: